Behavioral responses of Escherichia coli to changes in redox potential 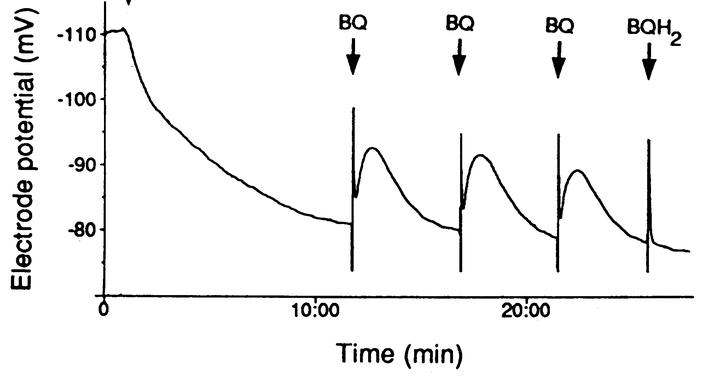 Escherichia coli bacteria sensed the redox state in their surroundings and they swam to a niche that had a preferred reduction potential. In a spatial redox gradient of benzoquinone/benzoquinol, E. coli cells migrated to form a sharply defined band. Bacteria swimming out of either face of the band tumbled and returned to the preferred conditions at the site of the band. This behavioral response was named redox taxis. Redox molecules, such as substituted quinones, that elicited redox taxis, interact with the bacterial electron transport system, thereby altering electron transport and the proton motive force. The magnitude of the behavioral response was dependent on the reduction potential of the chemoeffector. The Tsr, Tar, Trg, Tap, and CheR proteins, which have a role in chemotaxis, were not essential for redox taxis. A cheB mutant had inverted responses in redox taxis, as previously demonstrated in aerotaxis. A model is proposed in which a redox effector molecule perturbs the electron transport system, and an unknown sensor in the membrane detects changes in the proton motive force or the redox status of the electron transport system, and transduces this information into a signal that regulates phosphorylation of the CheA protein. A similar mechanism has been proposed for aerotaxis. Redox taxis may play an important role in the distribution of bacterial species in natural environments.