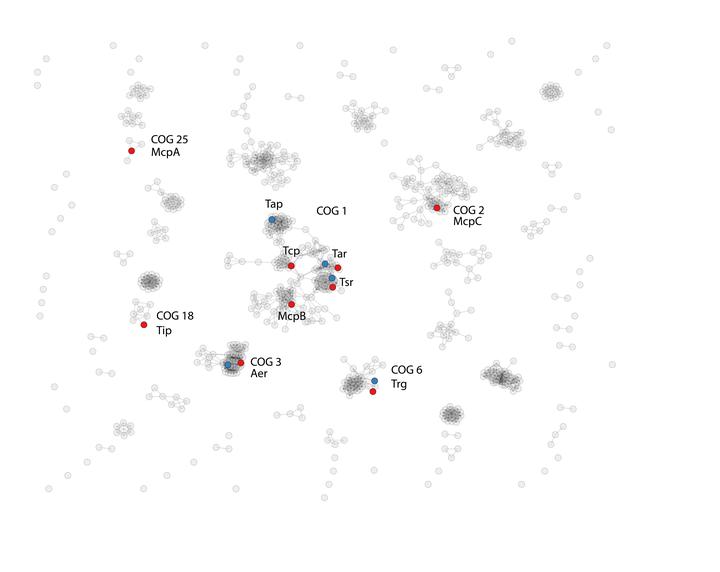 Escherichia coli and Salmonella enterica are models for many experiments in molecular biology including chemotaxis, and most of the results obtained with one organism have been generalized to another. While most components of the chemotaxis pathway are strongly conserved between the two species, Salmonella genomes contain some chemoreceptors and an additional protein, CheV, that are not found in E. coli. The role of CheV was examined in distantly related species Bacillus subtilis and Helicobacter pylori, but its role in bacterial chemotaxis is still not well understood. We tested a hypothesis that in enterobacteria CheV functions as an additional adaptor linking the CheA kinase to certain types of chemoreceptors that cannot be effectively accommodated by the universal adaptor CheW. Phylogenetic profiling, genomic context and comparative protein sequence analyses suggested that CheV interacts with specific domains of CheA and chemoreceptors from an orthologous group exemplified by the Salmonella McpC protein. Structural consideration of the conservation patterns suggests that CheV and CheW share the same binding spot on the chemoreceptor structure, but have some affinity bias towards chemoreceptors from different orthologous groups. Finally, published experimental results and data newly obtained via comparative genomics support the idea that CheV functions as a “phosphate sink” possibly to off-set the over-stimulation of the kinase by certain types of chemoreceptors. Overall, our results strongly suggest that CheV is an additional adaptor for accommodating specific chemoreceptors within the chemotaxis signaling complex.