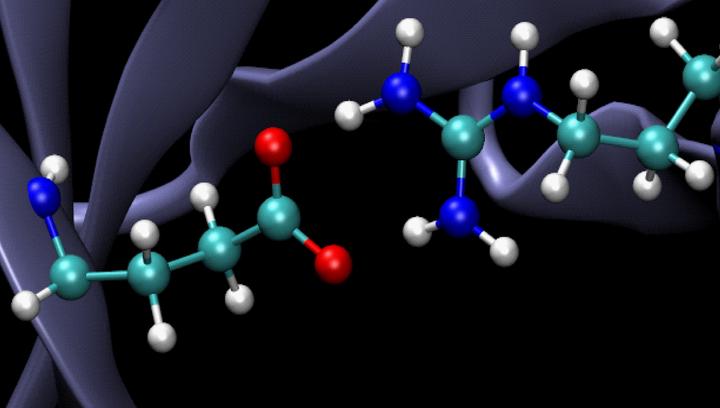 Bacterial chemotaxis is one of the best studied signal transduction pathways. CheW is a scaffold protein that mediates the association of the chemoreceptors and the CheA kinase in a ternary signaling complex. The effects of replacing conserved Arg62 of CheW with other residues suggested that the scaffold protein plays a more complex role than simply binding its partner proteins. Although R62A CheW had essentially the same affinity for chemoreceptors and CheA, cells expressing the mutant protein are impaired in chemotaxis. Using a combination of molecular dynamics simulations (MD), NMR spectroscopy, and circular dichroism (CD), we addressed the role of Arg62. Here we show that Arg62 forms a salt bridge with another highly conserved residue, Glu38. Although this interaction is unimportant for overall protein stability, it is essential to maintain the correct alignment of the chemoreceptor and kinase binding sites of CheW. Computational and experimental data suggest that the role of the salt bridge in maintaining the alignment of the two partner binding sites is fundamental to the function of the signaling complex but not to its assembly. We conclude that a key feature of CheW is to maintain the specific geometry between the two interaction sites required for its function as a scaffold.