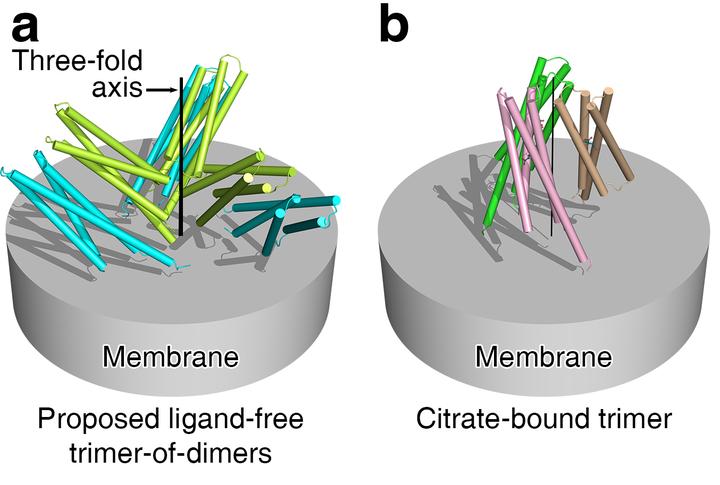 Transmembrane chemoreceptors are widely present in Bacteria and Archaea. They play a critical role in sensing various signals outside and transmitting to the cell interior. Here, we report the structure of the periplasmic ligand-binding domain (LBD) of the transmembrane chemoreceptor MCP2201, which governs chemotaxis to citrate and other organic compounds in Comamonas testosteroni. The apo-form LBD crystal revealed a typical four-helix bundle homodimer, similar to previously well-studied chemoreceptors such as Tar and Tsr of Escherichia coli. However, the citrate-bound LBD revealed a four-helix bundle homotrimer that had not been observed in bacterial chemoreceptor LBDs. This homotrimer was further confirmed with size-exclusion chromatography, analytical ultracentrifugation and cross-linking experiments. The physiological importance of the homotrimer for chemotaxis was demonstrated with site-directed mutations of key amino acid residues in C. testosteroni mutants.