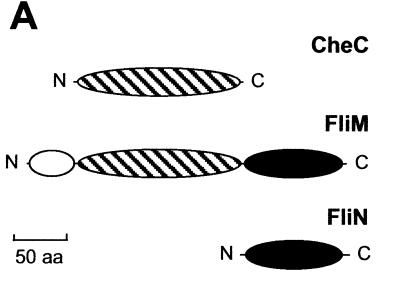 Chemotaxis by Bacillus subtilis requires the inter-acting chemotaxis proteins CheC and CheD. In this study, we show that CheD is absolutely required for a behavioural response to proline mediated by McpC but is not required for the response to asparagine mediated by McpB. We also show that CheC is not required for the excitation response to asparagine stimulation but is required for adaptation while asparagine remains complexed with the McpB chemoreceptor. CheC displayed an interaction with the histidine kinase CheA as well as with McpB in the yeast two-hybrid assay, suggesting that the mechanism by which CheC affects adaptation may result from an interaction with the receptor–CheA complex. Furthermore, CheC was found to be related to the family of flagellar switch proteins comprising FliM and FliY but is not present in many proteobacterial genomes in which CheD homologues exist. The distinct physiological roles for CheC and CheD during B. subtilis chemotaxis and the observation that CheD is present in bacterial genomes that lack CheC indicate that these proteins can function independently and may define unique pathways during chemotactic signal transduction. We speculate that CheC interacts with flagellar switch components and dissociates upon CheY-P binding and subsequently interacts with the receptor complex to facilitate adaptation.