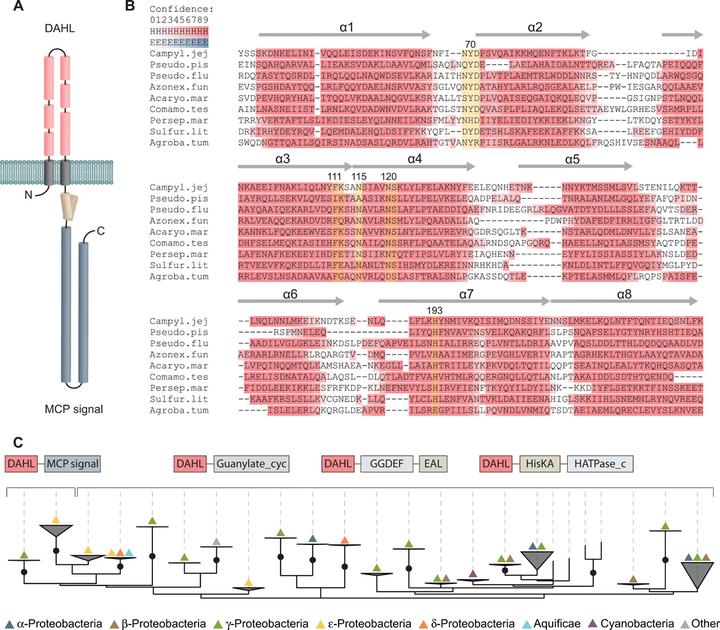 Campylobacter jejuni is a bacterial pathogen that is a common cause of enteritis in humans. We identified a previously uncharacterized type of sensory domain in the periplasmic region of the C. jejuni chemoreceptor Tlp10, termed the DAHL domain, that is predicted to have a bimodular helical architecture. Through two independent ligand-binding sites in this domain, Tlp10 responded to molecular aspartate, isoleucine, fumarate, malate, fucose, and mannose as attractants and to arginine, galactose, and thiamine as repellents. Tlp10 also recognized glycan ligands when present as terminal and intermediate residues of complex structures, such as the fucosylated human ganglioside GM1 and Lewisa antigen. A tlp10 mutant strain lacking the ligand-binding sites was attenuated in its ability to colonize avian caeca and to adhere to cultured human intestinal cells, indicating the potential involvement of the DAHL domain in host colonization and disease. The Tlp10 intracellular signaling domain interacted with the scaffolding proteins CheV and CheW, which couple chemoreceptors to intracellular signaling machinery, and with the signaling domains of other chemoreceptors, suggesting a key role for Tlp10 in signal transduction and incorporation into sensory arrays. We identified the DAHL domain in other bacterial signal transduction proteins, including the essential virulence induction protein VirA from the plant pathogen Agrobacterium tumefaciens. Together, these results suggest a potential link between Tlp10 and C. jejuni virulence.